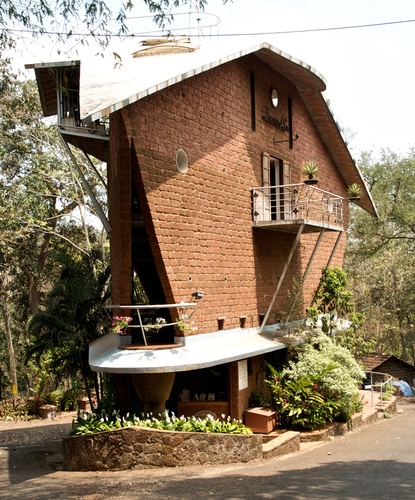 Goa has enjoyed a unique history as a result of both Western and Eastern influences. This unique history is especially visible in the architecture and layout of Goan Homes.

“When the Portuguese colonized Goa,” the famous Goan architect Gerald da Cunha says, “they brought in their own architectural designs and lifestyle to influence the already strong culture and architecture that prevailed here. As a result of the amalgamation, an entirely new thing emerged. What you see in Goan houses, you don’t see in Portugal, or elsewhere in the world.”

The Houses of Goa is a unique museum by Gerard da Cunha and a must see for all students and fans of unique Goan architecture from the American Ambassador and his wife to local couples who come to discover their Goan heritage. As an architect and a Goan, da Cunha felt that it was his responsibility to document the architecture as a local.

The result is a rather strange ship like structure with exposed brick that houses this museum, located kind of right in the middle of the road !

On the first floor, you have a depiction of Goa in the context of the world as well as wealth of Goan architecture.

On the second floor, Gerard da Cunha delves into the details of Goan architecture with a painstaking collection of doors, windows, a rare hat stand, old French doors from a house in Margao built in 1917 as well as rare postcards of Goa dating back to 1900, giving an exclusive picture of what Goa and its cities looked like a century ago.The panels on the walls showing important Goan monuments such as the Se Cathedral as well as other world monuments that were built at the same time in other parts of the world.

Climb the winding steps to the theatre upstairs and you can see a slide show presentation, with an adaptable screen, conducted by Da Cunha himself and taking you on an architectural tour back to the earliest mud house.

What I personally liked best about the Museum is the fact that it never seems finished, always a work in progress. The many trinkets, paintings and architectural accessoires seem to be in a permanent state of influx. I guess, what I am trying to say is that it is as if the Museum is constantly changing, evolving, like a living being.

“Goans, who were people who were converted, were looking for a new identity, and thus embarked on the experiment in architecture, to produce something unique and unseen anywhere in the world”.

Only a 5 km drive from my Mitaroy Goa Hotel, the Houses of Goa Museum is located in Torda, Salvador-do-Mundo village of Bardez taluk in North Goa.

Please note that the Houses of Goa Museum is open from 10 AM to 7.30 PM and closed on Mondays!